Ubuntu Linux is not the prettiest of operating systems. I mean sure, it has some nice neat themes, but when it comes to toolbars, windows and other graphical stuff, it really does not cut the cheese.
Along comes Beryl, no, not a 60 year old grandmother from Wagga Wagga, but a program that sits on top of linux that makes it pretty.
Beryl (and XGL windows manager) takes not all that long to set up, about 10 min, as long as you have the correct video drivers installed, and as soon as you restart, you have the most pretty and cool operating system around.
Steve Jobs eat your heart out. Macintosh computers have just been trumped with a bling package that beats both Vista and Apple Mac OSX hands down. And it is incredibly fast as well.
It uses the open graphics layer, made for linux to display some funky effects. Some of which I will outline below: 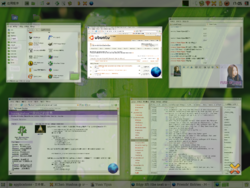 "Window Shading"
This is where you press F9 and get a tile view of what is going on. It allows you to click any of the programs that is open to switch to.

There are also some really cool animations of the windows falling onto this shade mode when it is activated. I am not sure that this will be incredibly useful unless you have a lot of windows open because Alt-Tab is a lot quicker, but it sure is fun. 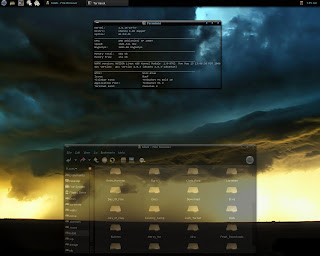 "Transparency is the new black"

And not just the fixed transparency stuff. I mean instant graphically rendered transparency. Making windows transparent when you are moving or resizing them, giving shadows to those windows and being able to alter the transparency depending on what program is active or your mouse over. 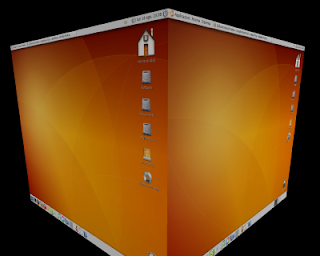 "The Cube" is the invention of linux. All linux users love their multiple desktops, and this makes it just that little bit more pretty, placing the desktops on a rotating cube seems like just a silly graphics for the sake of graphics thing, but it actually allows you to conceptualise your workspace, just as you do on your desk. Your documents are in one part, your inbox in the corner, your phone on your right. Well this is the computer equivalent. Once you get used to it, you can't go back! There is also a desktop slider available if you don't like the cube. Sliding across a big desktop is fun also. 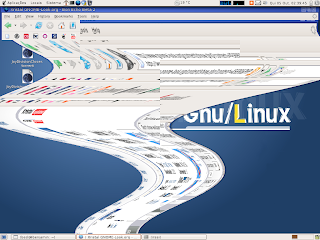 "Wobbly Windows" are a concept that is being tried in Windows Vista, and I have heard that you need incredible processing power to get them working properly. Under Ubuntu they work just fine on my laptop! Which has an AMD Sempron (like Celeron) processor (slow), and I have no problems getting them to work. It is a little bit annoying at first, but I am sure that we will get used to moving windows that move like liquid pretty quickly. There are also some pretty cool minimise and maximise effects like wobbly windows known as the genie bottle, Your windows shrink into the taskbar just like a genie.


Here are some other neat effects that are useful, that I will post screenshots of shortly:

"Negative"
This is incredibly useful for users of laptops or computers in a sunny environment, with glare on the screen it is very hard to read black writing on white background, so make it negative using Win-N or Win-M for either the window or the whole screen. Again, seems silly, but when I am sitting in the sun working on my laptop I will be happy.

"Emphasise"
You do not realise how distracting that start bar is, so make is fade to black. By pressing Win-P it makes the current window become the emphasis of your work by making everything else dark. Very handy for watching non-full screen movies, or just when you want to concentrate.

"Shadows and 3D"
Now everything is 3d, they cast shadows, and they look more like a workplace than just a place to keep your email. It is amazing how much just a little realistic shadow and perspective allows you to really focus on what is important.

Other non-useful effects - these can be turned off very easily.

"Burn"
When you close a program this little effect makes it look like the window burns away, smoke and all. You can even change the colour of the fire if you want.

"Sticky Edges"
You know how annoying it is to line up windows with the edges of other windows or the edge of the screen, but what happens when you have wobbly windows and sticky edges? I will tell you what, windows that get stuck! That you need to actually pull free in a jerk motion to allow you to move them.

"Rain"
Activating the rain feature on the computer makes raindrops fall all over your desktop while you are working. This is quite annoying (but still pretty) unless you are an interstate truck driver used to the rain in front of your workplace. Oh and it does come supplied with a winscreen wiper also.

I hope this summary of some of the more useful features of Beryl on Ubuntu is interesting for you to read, and I am sure there will be more to come, about the use and features of Ubuntu.
Posted by Michael Wheatland at 10:19 am