Ubuntu does have some downfalls, but they are usually quickly rectified by the solid community surrounding linux.
One of these weaknesses includes instant messaging.

GAIM, the Gnome instant messenger that is supplied with Ubuntu, is at best terrible.
I don't think that the people designing GAIM have thought about what instant messaging entails.
As far as I can see, most connectivity is provided by GAIM, allowing a user to connect, message and send files to friends. But Instant messaging is a lot more than that. It should include a fully skinable interface (which no linux IM apps have) and include functionality for voice and video chat.

GAIM 2.0 beta6 is available, but it still does not support themes. There seems to be little to no improvement in comparison with other programs on Ubuntu, which I think should change. I mean, I would be very willing to design some artwork if someone could show me where to put it to make GAIM look good.

But wait, there is more.
One of the possibilities in the near future is that the traditionally windows oriented IM Trillian could push into the bleak linux landscape with their soon to be released Trillian Astra. This could be in the form of a linux port, a windows emulation and transfer via WINE, or just make a web window allowing access to the web interface that they say will revolutionise instant messaging.

I think it might take some time to sort out this shortfall, but in my opinion I think that GAIM really should be retired as a graphical application, and sent to the back room as a process so that others can design a user interface around it.

Below is a simple comparison of the general quality of each program. Gaim, Kopete and finally Trillian Astra. 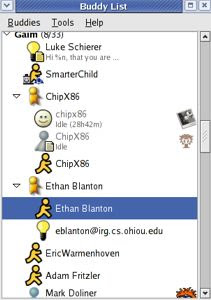 Posted by Michael Wheatland at 11:59 am