Having not received my HTC desire for review yet, I have decided to do a review on the systems of the HTC Desire (Android) vs the Apple iPhone from a global community and competition point of view.
------
Kickstart
There is no denying that the Apple iPhone has been a game changing phone. It has challenged phone manufacturers to step up to the plate and provide more than just the basic call and message system with some Java support which has been on all phones for around 10 years.
The kick start which Apple has provided the mobile world has both provided great opportunity for business and individuals to make money off the blooming world of mobile communications NG as long as you play by Apples rules. 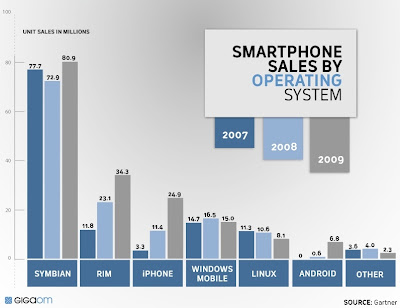 Almost every large store, bank, social network, service provider has created an iPhone application, which cannot be recycled by moving
the application from one platform to another. One might say that this was a good investment as the number of iPhones exceeds the number of any other next generation mobile OS. However this is NOT true. By far Symbian is the highest selling mobile OS and Blackberry sells a vast number more phones than Apple.
(Source: Giga OM)
So the question stands, why have all these amazing applications 'popped up' just for the iPhone?
Why Open Source?
Since the early days of open source there have been many geeks who profess open source love to all, however there are now larger players stepping into the market, creating open source software which not only competes with 'closed' software but exceeds the closed systems is ease of use, speed and cost (free), such as Mark Shuttleworth, the South African astronaut who brought you Ubuntu (which I am using to write this article) and Google with the new Android OS.
Why are these people creating free software and how is it possible for them to be better than Windows or Apple operating systems?
Mark Shuttleworth and Ubuntu (Translates loosely to 'Humanity through relationships') have an agenda to make it cheaper and easier for people to use computers. Google however has a financial profit agenda. They want more people using the internet 'Googling' things to provide advertising revenue. This is not a bad thing, your search results have been provided this way for years.
The benefit with these operating systems and software is that YOU can change them. You can suggest better ways of doing things, create better graphics and icons or even reprogram part of the system to work better or be more secure. There is a very large community of open source users waiting for your suggestions. Android is no different, there is a development community who are waiting for you to make a suggestion.
Opportunities
The power of the new generation of open source mobile platforms such as Android is that application and service developers can create one application on their favourite development platform and then port it to other open source and closed source devices (all except Apple).
There has been many examples of Apple rejecting applications which people and companies have invested time and money without explanation. Due to the restrictive nature of the iPhone/iTunes symbiotic relationship and Apples strangle hold on all applications which can be run on an iPhone there is a good chance that Googles Android OS will fill the gap by allowing local install of applications without the need to Jail Break your iPhone out of it's closed source prison.
Apple has even rejected the possibility of developers creating applications in flash and translating them into an iPhone application using technology Adobe is about to launch.
Another example of good money after bad when developing applications for Apple OS.
Flash
Last but not least, the iPhone will not have flash support. This means that there are many websites which will simply not work on the iPhone. New social networks or favourite TV show sites which have not spent the money developing an Apple specific application will only be accessible using Android based phones.
The new Adobe Air development platform, along with the Open Source Screen Project have provided a path forward for application developers to move their content from PC to desktop to media player to TV.
Back to the future
The selection of mobiles which run open source software is vast, Symbian, Meebo and Android are just a few players. Android however has shown great promise, having Google invest millions into development and the 3rd party devices evolving fast. Some might say that just by restricting the iPhone OS to one device Apple has restricted rapid improvement of mobile technology, not to mention choice of devices.
I still don't know if the HTC Desire will be better than iPhone or a Sony Ericsson X10 or Motorola Droid. What I do know is that choosing an open mobile platform rather than a restrictive, closed OS designed only to run on one device provides choice into the future and a better end user experience in the long term.
Posted by Michael Wheatland at 2:09 pm